Architectural metal adds a contemporary twist to a mixed-use development that incorporates both new construction and an existing historic structure. 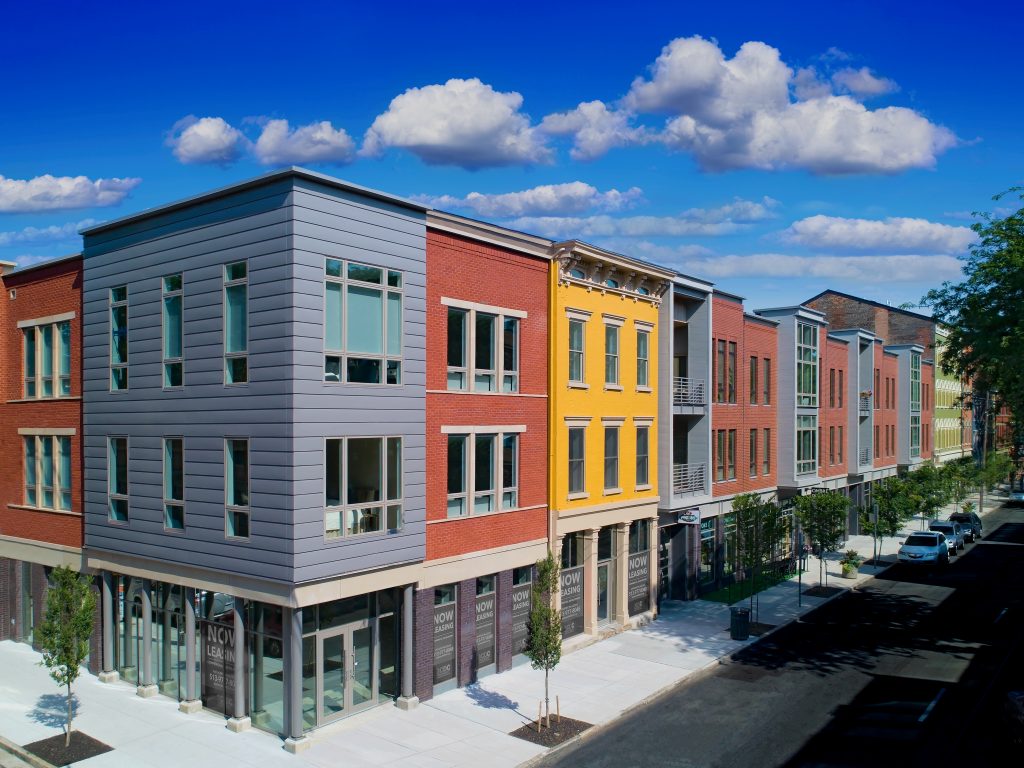 Cincinnati, St. Louis and Milwaukee often are referred to collectively as “the Great German Triangle,” because of the waves of German immigrants who settled in those three cities during the late 1800s. In Cincinnati, the Over-the-Rhine neighbourhood (“OTR” to locals) became the hub of German culture and home to a number of local breweries, before falling into decline. Over the past decade or so, OTR has come into its own, again, as a hip entertainment zone, complete with craft breweries that are reinvigorating the area’s century-plus traditions. A new mixed-use housing and retail development there draws on the local masonry architecture – and adds a contemporary twist with metal wall panels – as part of a 15-year effort to revitalize this once dilapidated area. 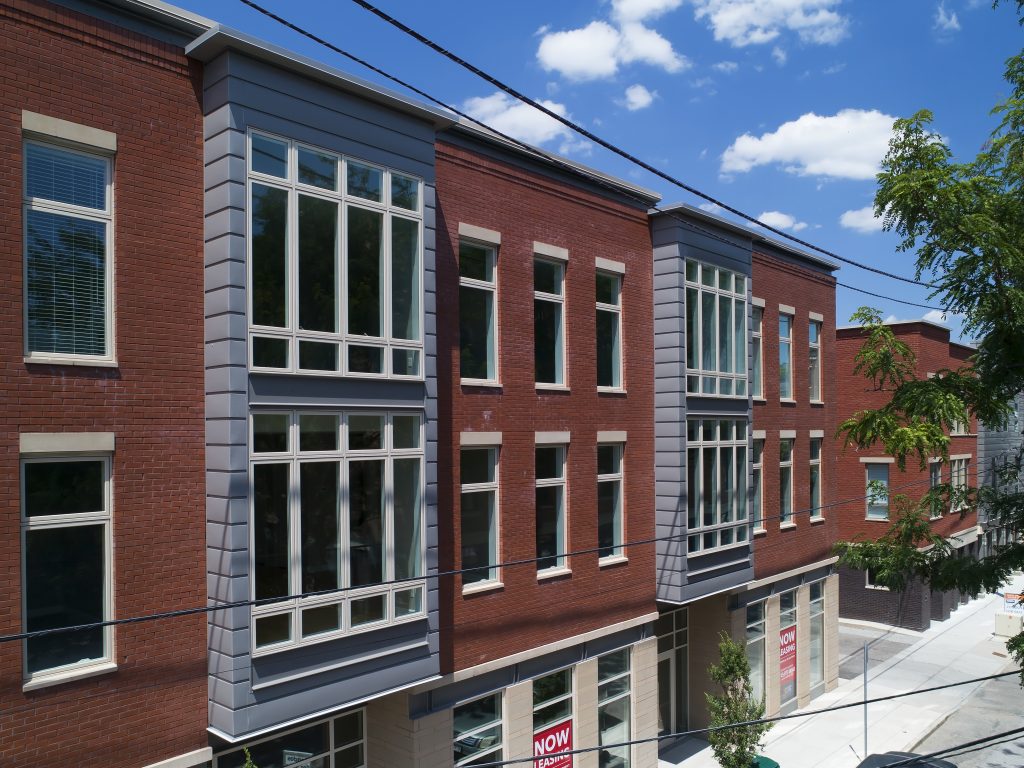 The Rennen & Beecher Flats incorporates a total of 18 condos and three ground-level retail spaces and is one of the latest in a long list of projects completed by the local nonprofit Cincinnati Center City Development Corporation (3CDC) in the OTR neighbourhood. It’s comprised of two separate new-construction buildings, one of which incorporates an existing historic structure. The developers wanted these infill structures to complement the surrounding architecture, rather than stand out – which also was a motive in the project’s naming.

“Since many of the original 19th-century apartment buildings in the historic Over the Rhine neighbourhood have names, giving these new buildings names seemed like a good way to be a good neighbour,” says architect Andreas Lange, AIA, senior associate with the local design firm Perfido Weiskopf Wagstaff + Goettel (PWWG). “The names don’t refer to any specific person, but they give the buildings some personality.”

Lange says his team’s brief was to create a contemporary, mixed-use building that still worked within this more traditional setting. Bayed fronts aren’t uncommon in the surrounding brick low-rise buildings, but the metal wall panels in the new structures give those elements a modern twist in PWWG’s plans.

“The large metal box was inspired by the traditional bay windows on many upper stories of other Italianate buildings,” Lange says. “We essentially offset this window form, then let it wrap the corner on Rennen. On Beecher, we used a more traditional bay window interpretation along the south and north face but wrapped the corner in glass and metal.”

In all, the architects specified 1,700 sq. ft. of Petersen’s .040-gauge Flush and Reveal aluminum panels in a Slate Gray finish, along with 600 sq. ft. of flat sheet material in the same gauge and finish. 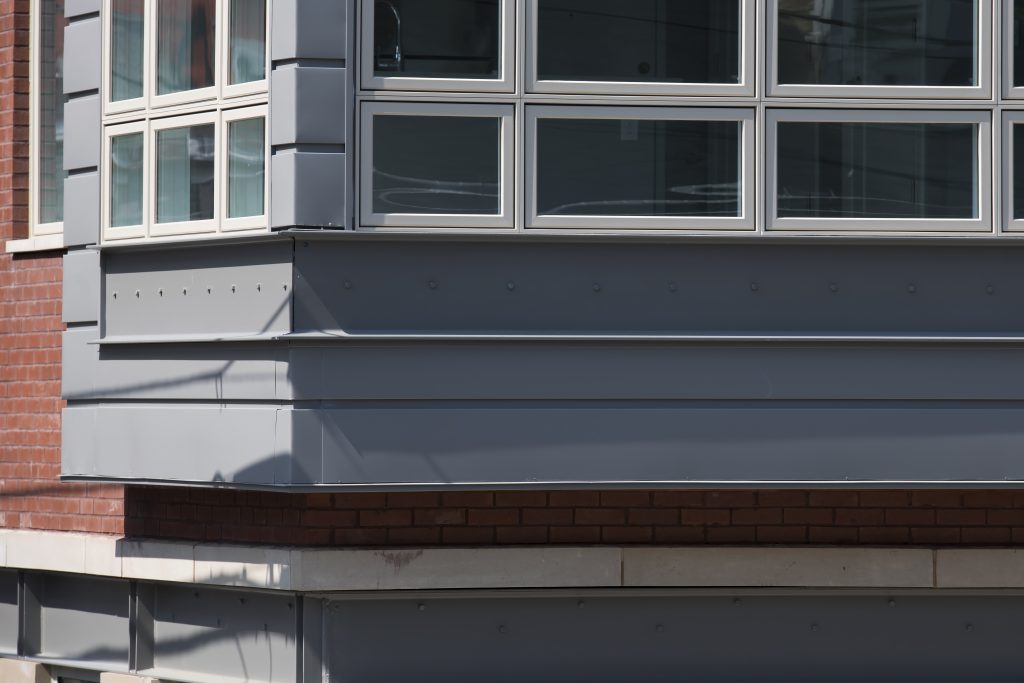 “The cantilevered bays needed to be light for structural reasons, and we wanted to maintain a contemporary feel to the design – metal siding was a natural choice,” Lange says of this decision. “If we employed the same forms, wrapped in more traditional siding or panelling, the final effect might not have been as strong. The contrast between the metal bays and traditional brick walls gives the project its rhythm and character.”

Among the highlights of the window bays is the way the panels wrap around the corners to create the crisp look PWWG’s designers intended. “The corner detail was absolutely critical to make this installation work – without it, the project’s main, contemporary character would have been compromised,” Lange says. “The corners make the project – they make a humble material special.”

Getting those corners to look as planned, though, took some doing. That’s where the skill of installers from the local firm of Deuss Enterprises came into play. These metalworking pros used Petersen’s flat sheet material to form the corners onsite. “To have them fabricated was very expensive,” says Blake Ross, the company’s director of construction, describing his crew’s efforts. “It wasn’t fun, but they turned out great.”

Ross says he counted on the assistance of Rick Carpenter, Petersen’s local architectural representative, throughout the installation. “If it weren’t for Rick, that job would not have gone nearly as successfully,” he says. “He was there at the end of that phone every time.”

The finished buildings have been very well received, with both residential and retail units filling quickly – and PWWG already has won a local Cincinnati AIA award for the project. For Deuss Enterprises, which hadn’t worked with Petersen previously, the job was just the beginning of a new relationship, according to Ross. “We’ve used the product on two other projects since then,” he says.

PAC-CLAD finishes are available in 46 standard colours. All finishes are Fluropon® 70% PVDF coatings made with Kynar 500® resin, and are backed with a 30-year warranty against chipping, chalking, peeling and fading. Most colours meet LEED, Energy Star and Cool Roof Rating Council certification requirements.