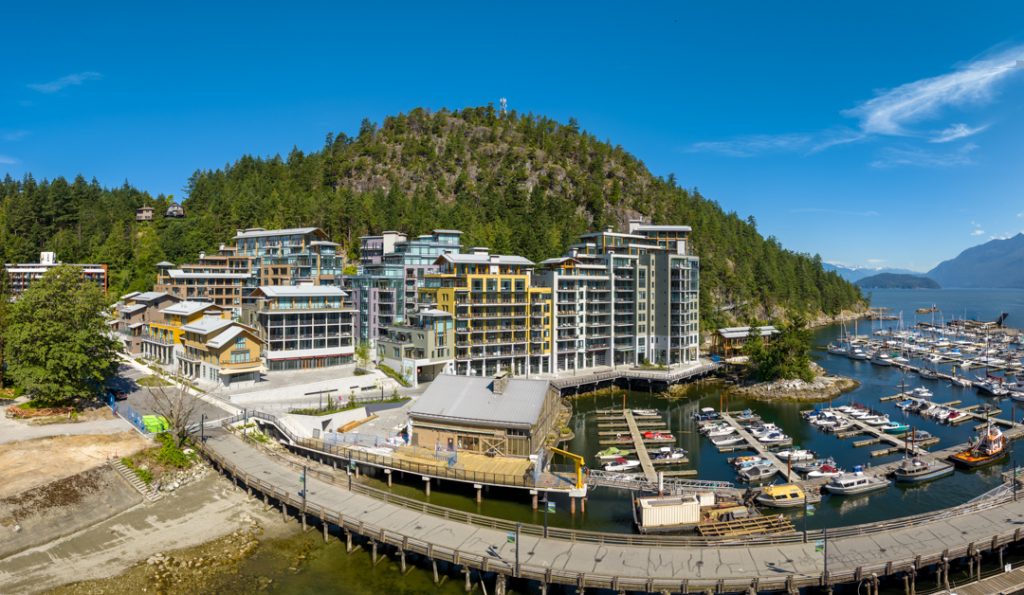 Don’t it always seem to go
That you don’t know what you’ve got ’til it’s gone
They paved paradise and put up a parking lot.

Like music lovers everywhere, the citizens of West Vancouver, British Columbia, were well acquainted with the seminal Joni Mitchell song and its naturalist sentiment. In 2015, these citizens were pitched by condo developers on the idea of building Sewell’s Landing on the banks of Horseshoe Bay.

Architect Paul Merrick’s ambitious and thorough plans turned Mitchell’s song on its head by ripping out the existing marina’s tarmac parking lot and leaving the natural beauty of the surrounding wooded hillside intact. 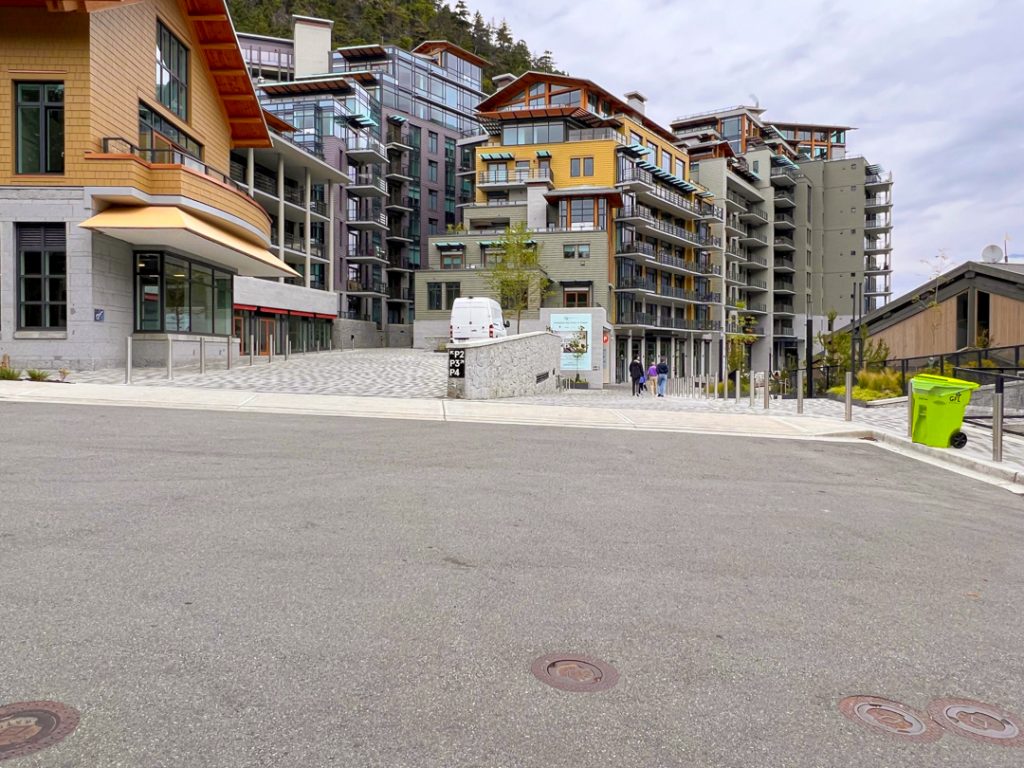 The plans were modeled on a traditional Italian seaside villa and included terraced residential units, along with cobblestone roads and walkways. The community-friendly project was finally greenlighted, with sustainability and eco-friendly solutions now at the forefront. 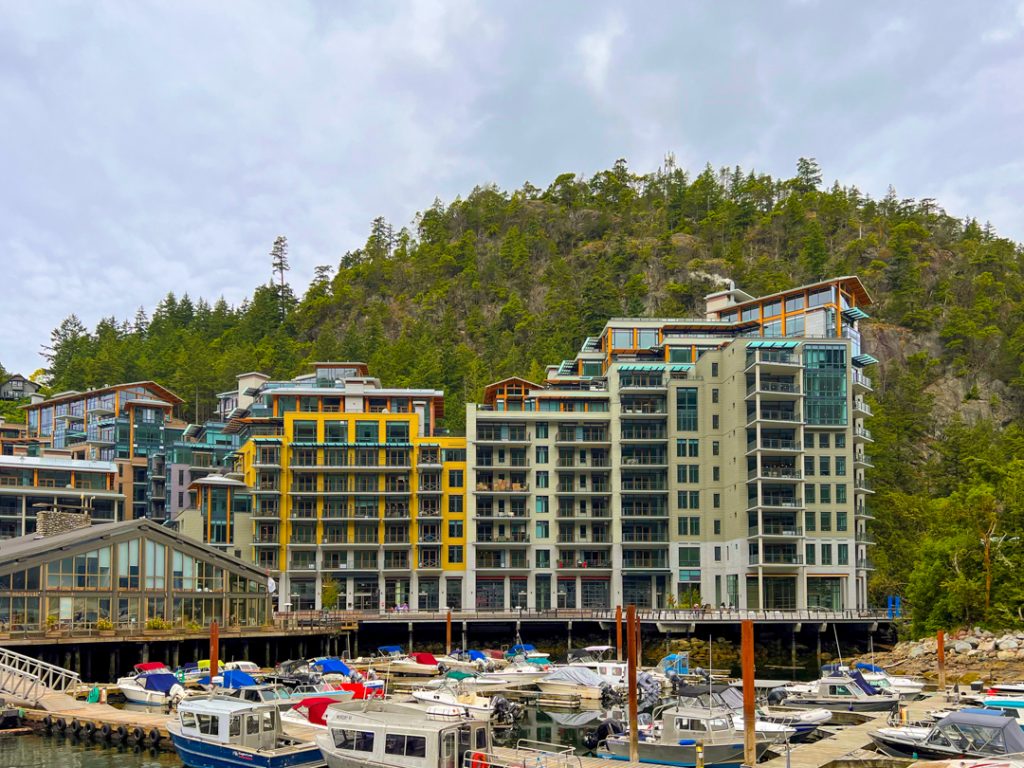 MAPEI on the job

Installing all those cobblestones and granite paving stones posed a challenge in finding the right setting products for such a unique application. It was a problem for which Dave Randall, MAPEI Business Development Manager for Western Canada, was brought in by Merrick to help solve.

Over the next seven years, Randall would serve as MAPEI coordinator on the project. He assisted in the installation of cobblestones and granite paving stones over a 36,000-square-foot (3 345-m²) area – including new underground parking – to meet the stringent specifications that are usually reserved for concrete or tarmac roads. 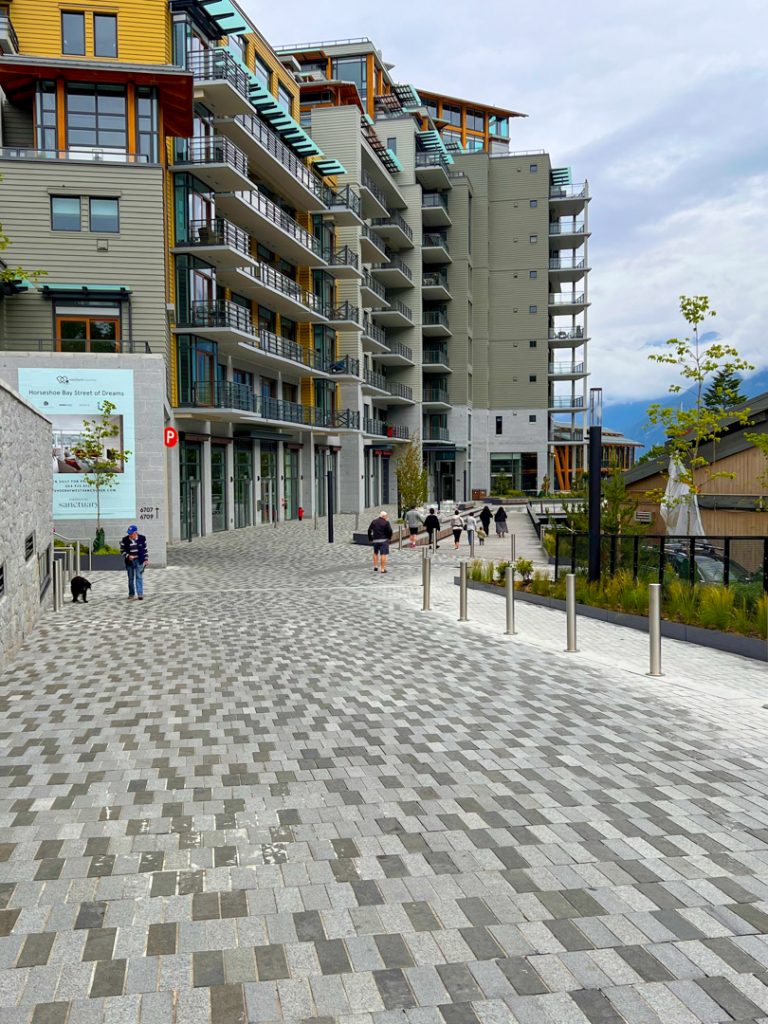 In North America, paving stones are not generally used for roads in this way. Therefore, Randall knew that the setting products that were required to meet that spec – as well as stand up to de-icing salts, seawater and freeze/thaw cycles – would not be easily found. 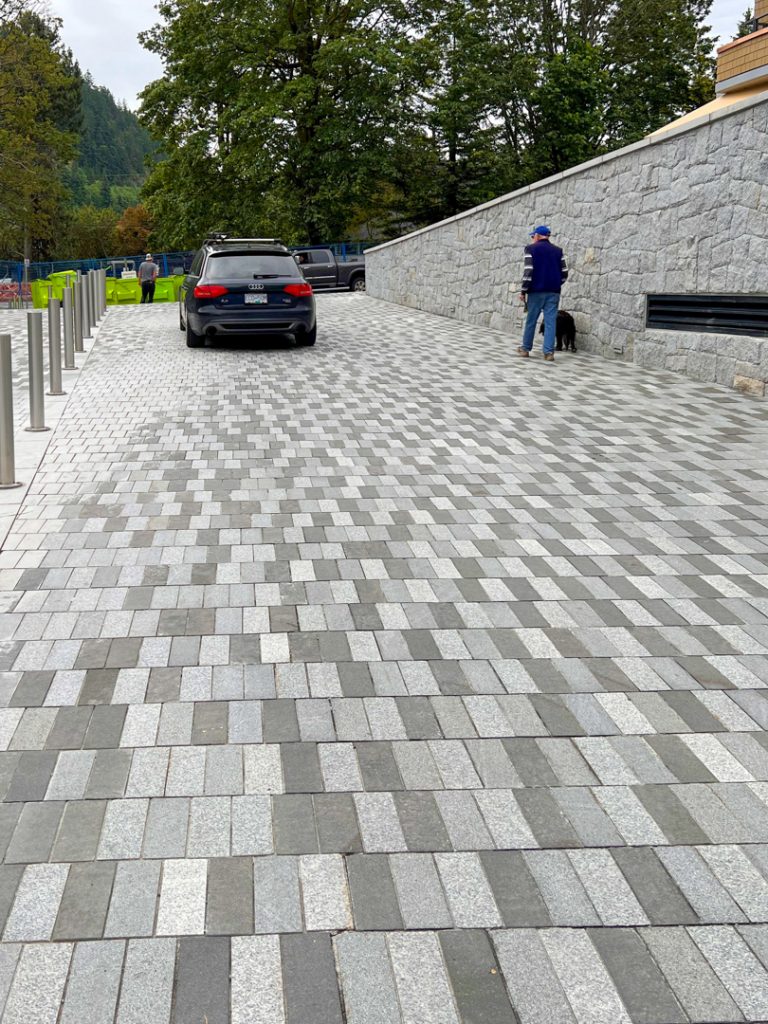 “I had to do some research,” he said dryly.

Looking to MAPEI’s existing Tile & Stone Installation Systems product line for North America at the time, Randall found none that quite fit all the criteria that was needed for this exclusive project. “Other mortars on the market might have the resilience for salt water and freeze/thaw, but not the strength,” he said. 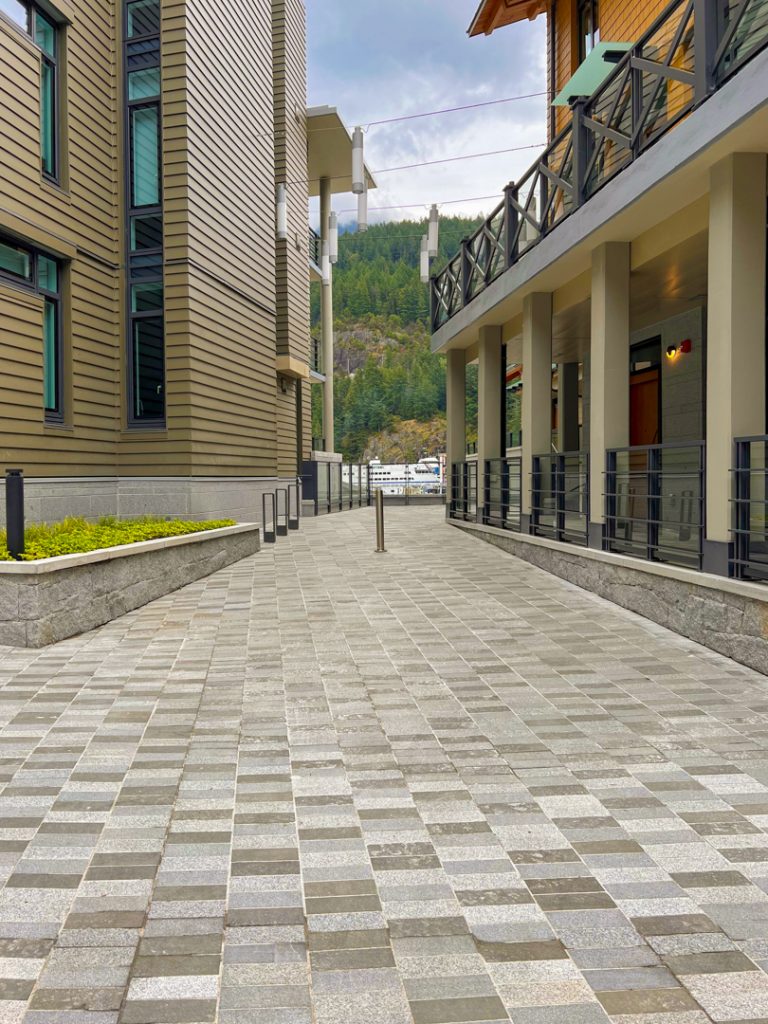 Mapei S.p.A. to the rescue

MAPEI Technical Services lent a hand by sourcing the mortars Mapestone TFB 60 and Mapestone PFS 2 from Mapei S.p.A. in Italy. These two products form the Mapestone system, which is a pre-blended screed mortar and grouting solution for architectural stone flooring that features high compressive strength and good resistance to freeze/thaw cycles, de-icing salts and seawater. 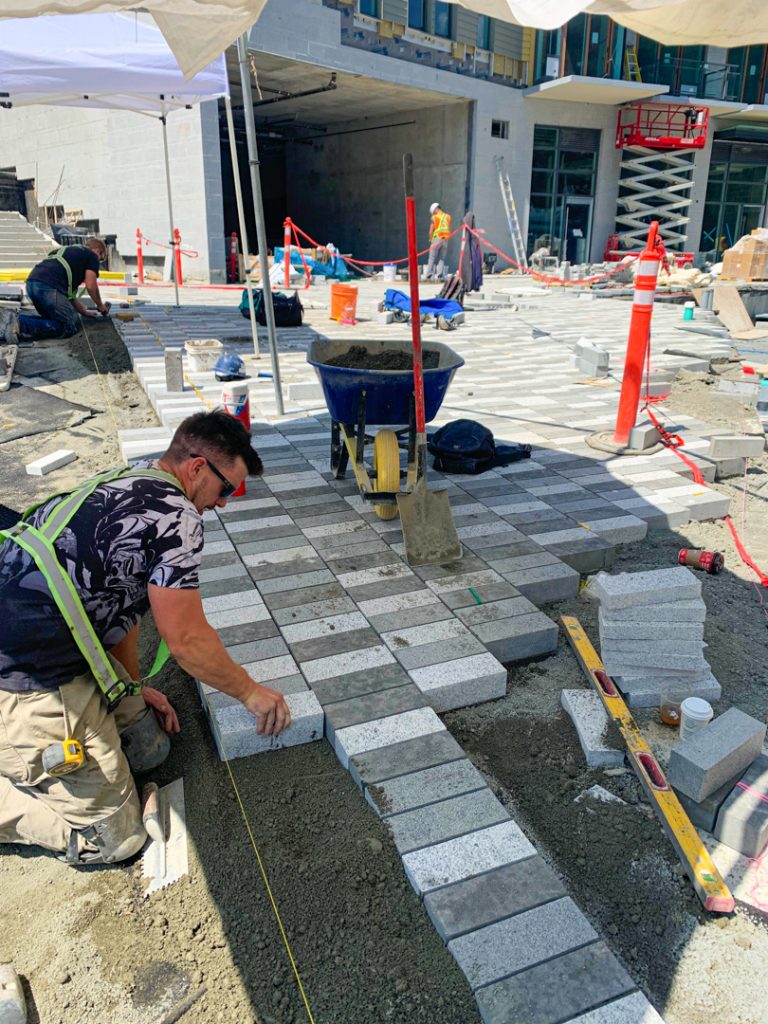 “I proposed it to Merrick and the other stakeholders at the time, and that got this put into the spec. Different landscapers came up with other ideas but nothing else met that spec, so we got on our horse and started the process in 2017 to bring the formula from Italy,” Randall said, noting that local production of materials is one of MAPEI’s core values.

Initial batches of Mapestone TFB 60 and Mapestone PFS 2 went through testing and trial runs in the nearby Delta, British Columbia, plant laboratory. 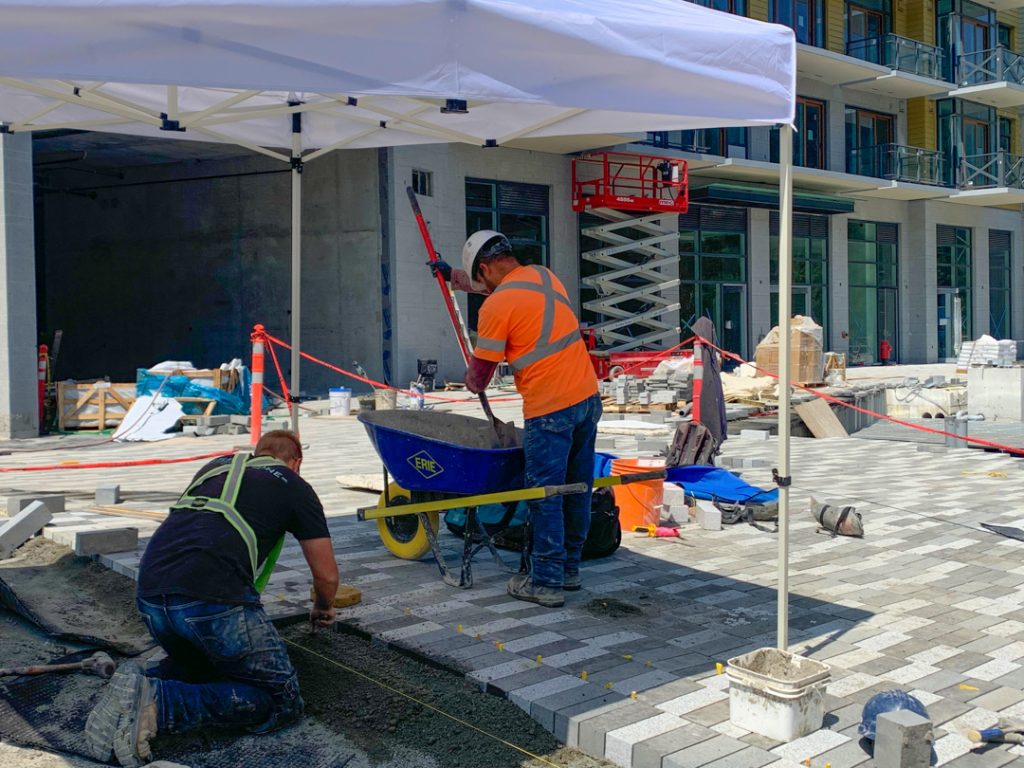 “Then, we did field trials and some mockups and got to put it into place in other local projects to get a good idea of how it performed. We did some training in the T. Moscone & Brothers’ yard in early 2020. It was a lengthy process,” Randall said.

Eventually, work got underway on the actual stone installation in 2021. Once the beds were prepared using 4 to 1™ Mud Bed Mix, workers from T. Moscone & Brothers Landscaping were able to get to work. 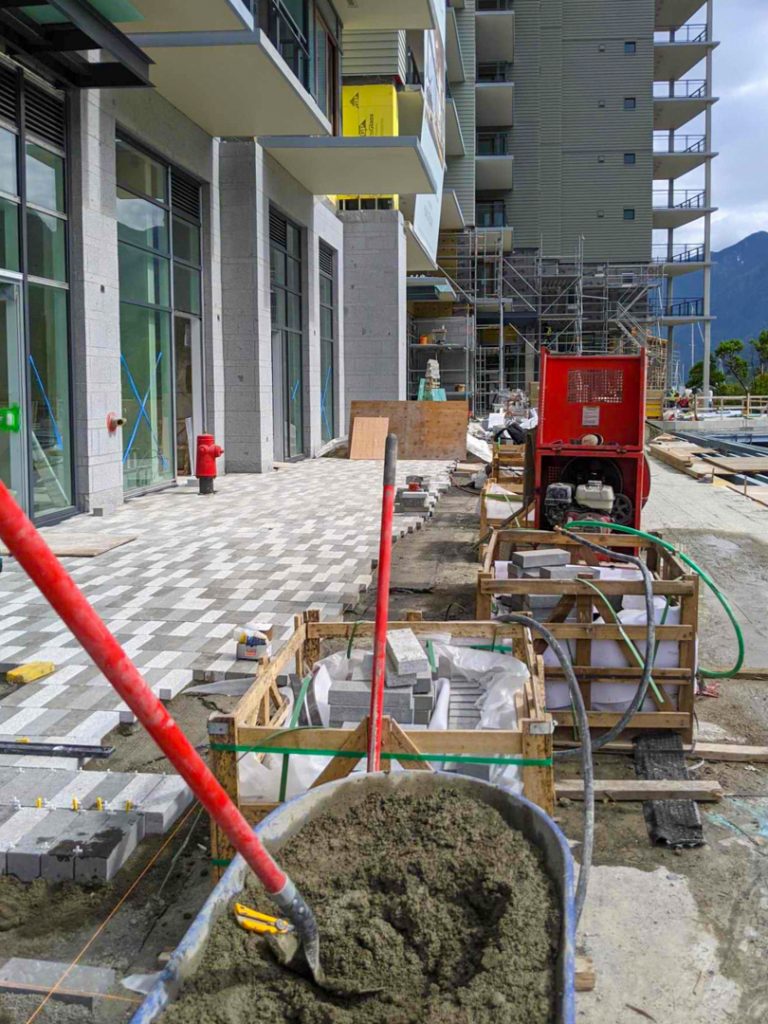 The stones themselves were back-buttered with Granirapid® System premium, rapid-setting mortar – designed to not contribute to efflorescence – before placement. Another helpful feature of this mortar is that it allows installation in both cold and warm temperatures. Additionally, Granirapid System’s early mechanical strength and rapid-setting qualities were helpful in dealing with sloped areas.

With the stones prepared, the team applied Mapestone TFB 60 to the bed into where the stones were then set; Mapestone PFS 2 was then applied for grouting. Planigrout® 755 construction grout also was used to secure linear drains for precipitation run-off. 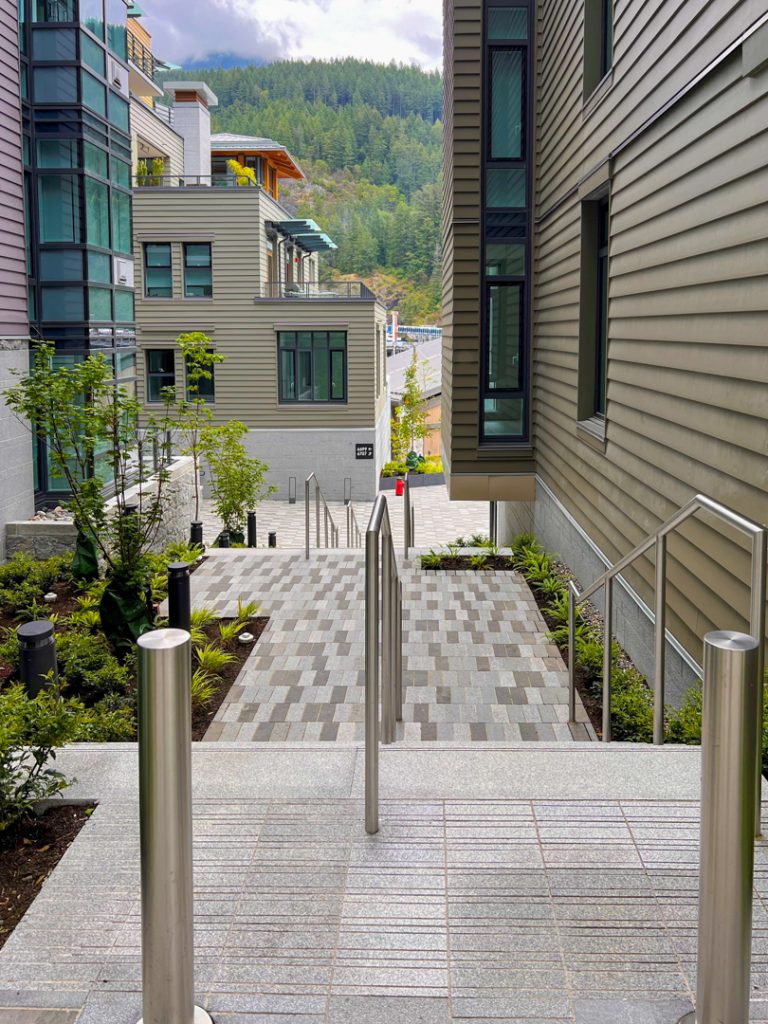 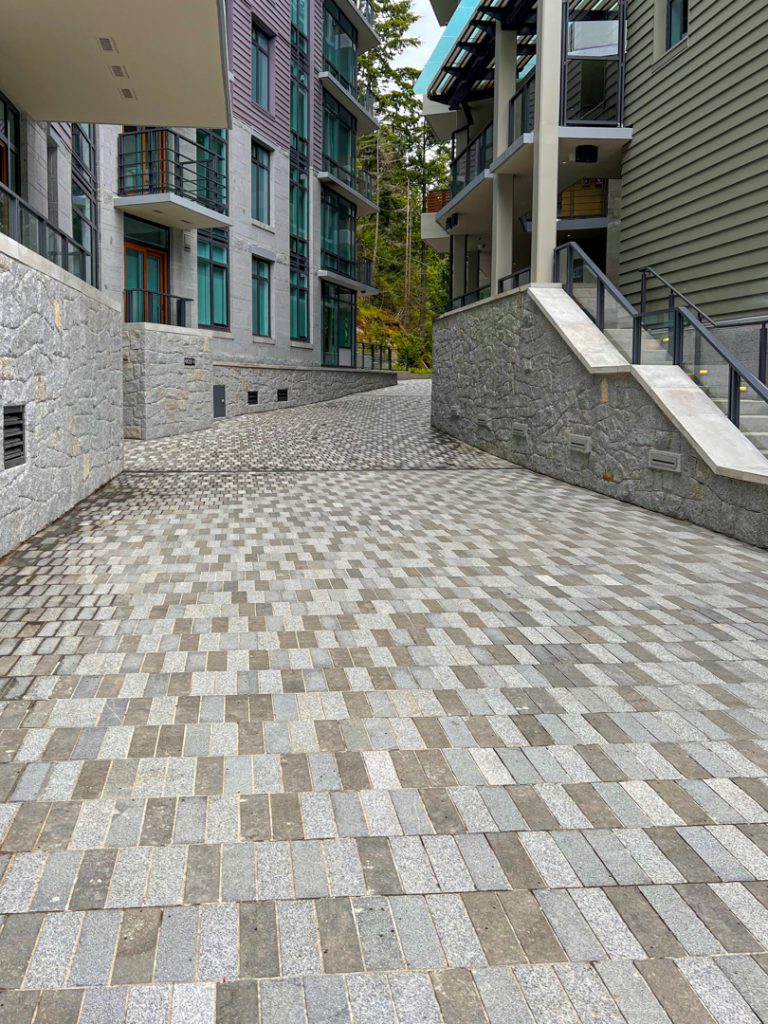 Nestled within the scenic Canadian Rocky Mountains. the finished Sewell’s Landing, though certainly not as rustic as one would find on the Mediterranean coast, does have a New World flair that is distinctly its
own. In 2022, Sewell’s Landing was fully delivered as advertised, with its durable and beautiful cobblestones covering the spaces in and around the new village and spruced-up marina. 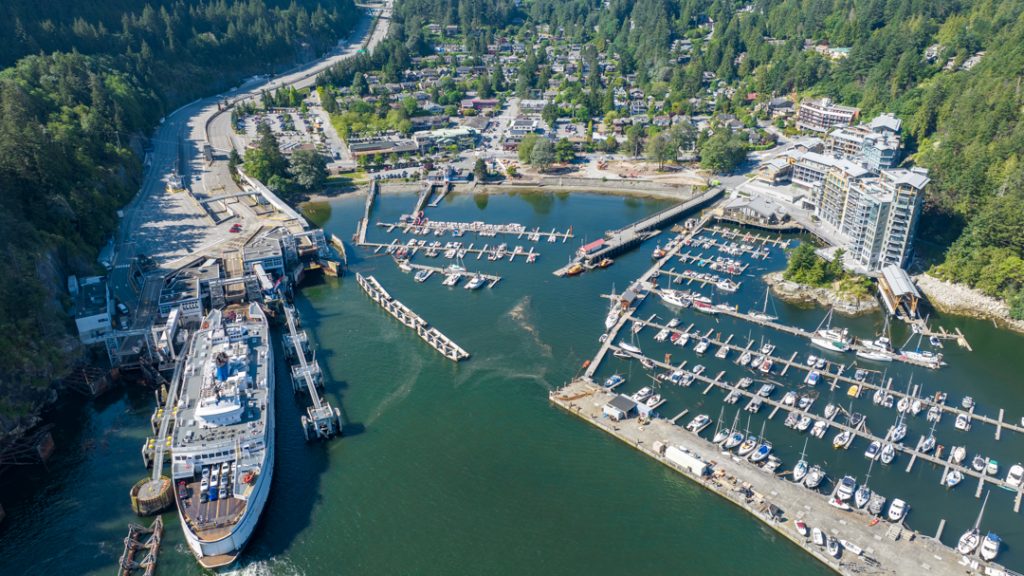 As if in a nod to Joni Mitchell, and with some help from MAPEI products, paradise was built over a parking lot this time.

MAPEI is a leading manufacturer of installation materials for concrete restoration solutions (CRS), including the maintenance of cast-in-place concrete. MAPEI also produces other concrete solutions including systems for moisture mitigation, structural strengthening and concrete repair products.

Founded in 1937 in Milan, MAPEI is now one of the world’s leading manufacturers of chemical products for the building industry and has contributed to the construction of some of the most important architectural and infrastructure works worldwide. With 100 subsidiaries operating in 57 countries and 86 manufacturing plants in 35 nations, MAPEI Group employs about 11,000 staff worldwide. The foundation for the success of the company is specialization, internationalization, research & development, and sustainability.

Headquartered in Deerfield Beach (Florida), MAPEI North America consists of the subsidiaries MAPEI Corporation (for the USA), MAPEI Inc. (for Canada) and MAPEI Caribe (for Puerto Rico and other Caribbean islands), whose 28 facilities collectively have a workforce of about 1,800 employees.

MAPEI facilities have been certified to ISO 9001 and ISO 14001 quality standards. An environmentally conscious manufacturer that reinvests 5% of its revenue into R&D, MAPEI offers training for architects, contractors, installers and distributors through the MAPEI Technical Institute. For more about MAPEI, visit www.mapei.ca or call 1-800-42-MAPEI (1-800-426-2734).

New Apartments Reflect an Indigenous Tribe’s History – And Its Future