GKD Metal Fabrics Is Off to the Races With ParisLongchamp Redesign

The Qatar Prix de l’Arc de Triomphe is considered the world championship of horse racing. Every year on the first Sunday in October, it attracts 60,000 keen spectators to the ParisLongchamp racecourse in the prestigious 16th District of Paris.

A setting for one of the most lucrative horse races in the world, the ParisLongchamp racecourse dates back to the 19th century. As expected with such a rich history, ParisLongchamp has experienced numerous remodeling projects during its existence. With multiple renovations and extensions, the course began to develop a non-cohesive network of buildings and spaces.

In 2011, world-renowned French architect Dominique Perrault won an international architecture competition to redesign the historic sporting venue. Perrault proposed tearing down the existing stands, as well as multiple buildings spread across the site, to create space for a new grandstand and pavilions that would secure the infrastructure required at a horse racing venue.

Perrault’s vision was that the 525-foot grandstand would incorporate an elegant but minimalistic design, linking the racecourse’s past with present. With 10,000 seats, 17 suites and 12 VIP lounges, the grandstand is well equipped to handle Qatar Prix de l’Arc de Triomphe and additional smaller races and events. 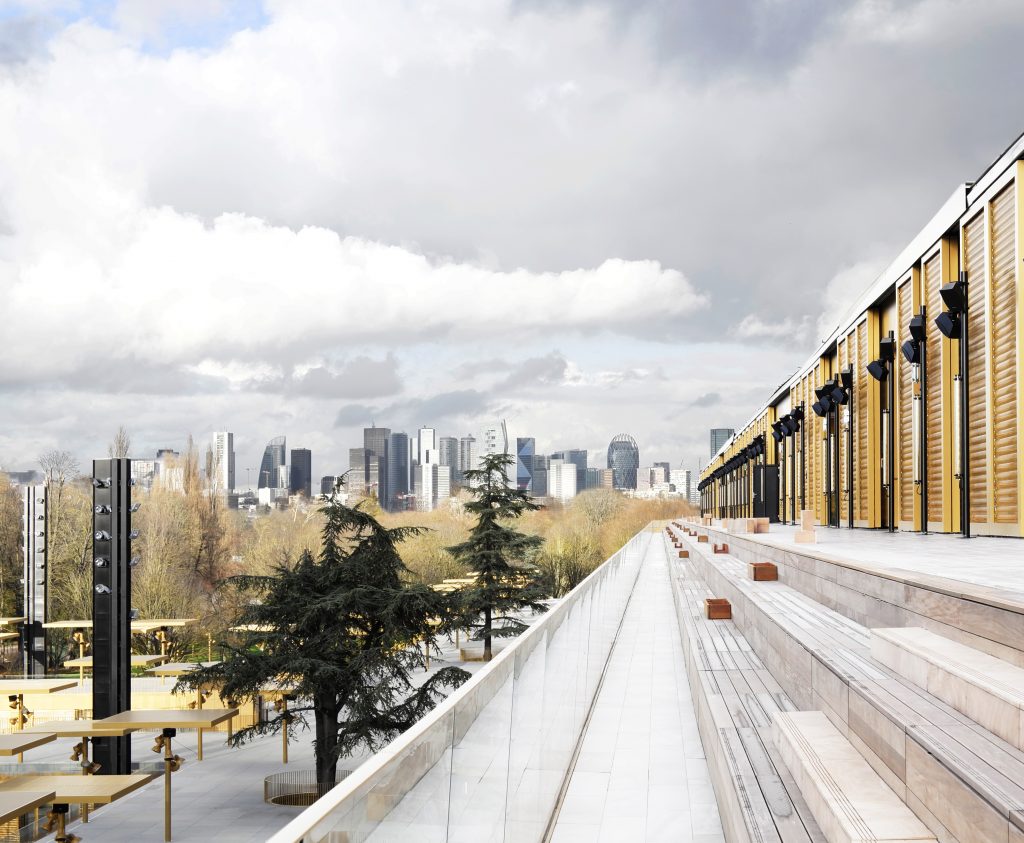 Faith and Trust in the Facades

When designing the grandstand’s facades, Perrault once again put his faith in the metal fabrics offered by GKD. The multifaceted aesthetics and versatile function of GKD’s metal fabrics have been fascinating to Perrault since 1990’s when he experienced his first major design success with the French National Library. Since that time, Perrault has incorporated GKD metal fabrics into dozens of his projects, making it an easy decision to implement the material into a historic and renowned building.

For the grandstand, Perrault selected GKD’s golden stainless steel ESCALE 7×1.5 fabric. The fabric was chosen in part to follow Perrault’s key design principles of movement and transparency. The characteristics of GKD’s metal fabrics help provide the grandstand with a sense of visual lightness and subtle kinetics.

Additionally, because of the spiral engineering of the fabric, the facades hold the ability to create interesting light effects throughout the seasons.

When closed, the panels protect the stand from becoming uncomfortably hot, therefore supporting the building’s energy concept. At the same time, the open fabric structure subtly filters daylight, allowing it to gently fill the rooms.

With unrestricted views, the facades lend themselves to unrestricted transparency. At night, interior lighting grants views into the building from the outside through the façade. 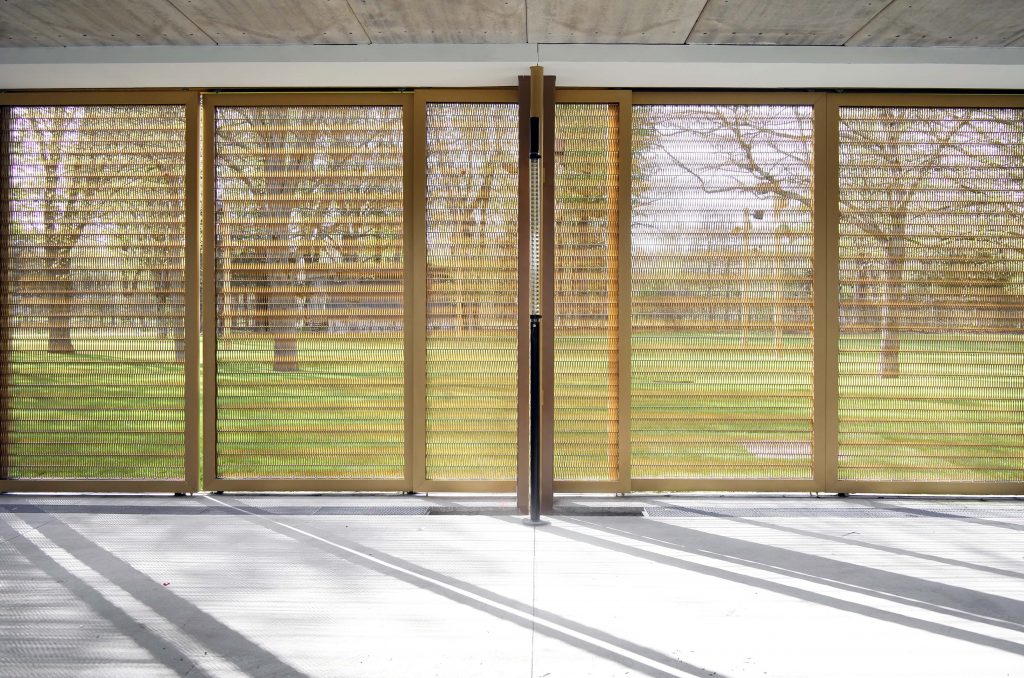 Perrault also relied on GKD metal fabric for the interior design of the grandstand. Used as acoustically effective ceilings, decorative suspended objects, as well as large-format wall hangings, the fabric elements show off further facets of their potential in ParisLongchamp.

For visual structuring of the spacious floors, Perrault vertically suspended fabric panels made of gold-anodized ESCALE 7×1. The panels create an elegant space, honoring ParisLongchamp’s past, while securing its future as a modern racecourse. 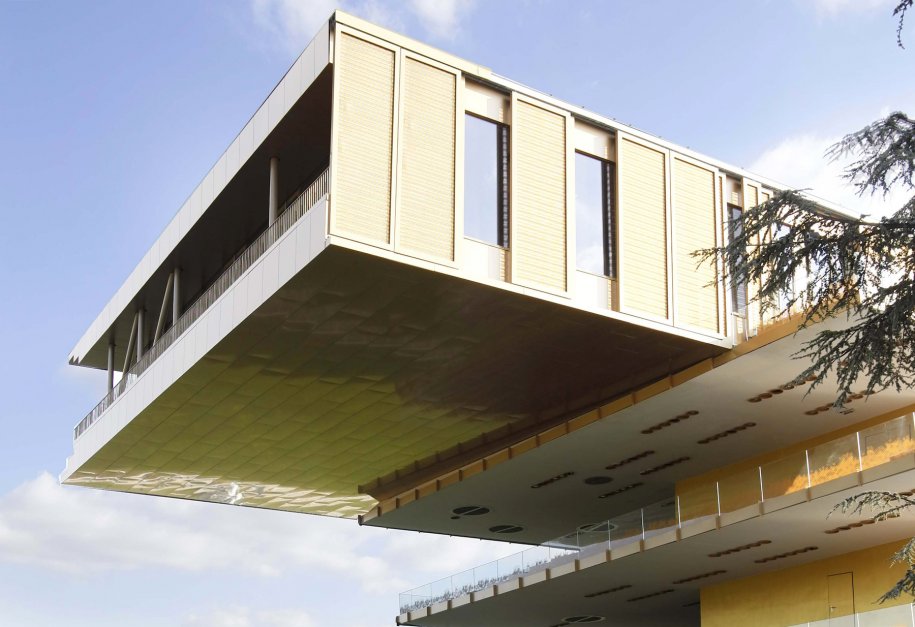 A Design for the Future of Horse Racing

With his concept of flexibility, Perrault responds to the challenges of the future in the world of horseracing. As a result, ParisLongchamp breaks away from the old pattern of racecourses, focusing on prestige, innovation and tradition. And with a fresh face from GKD metal fabrics, ParisLongchamp can go head-to-head against international comparisons. 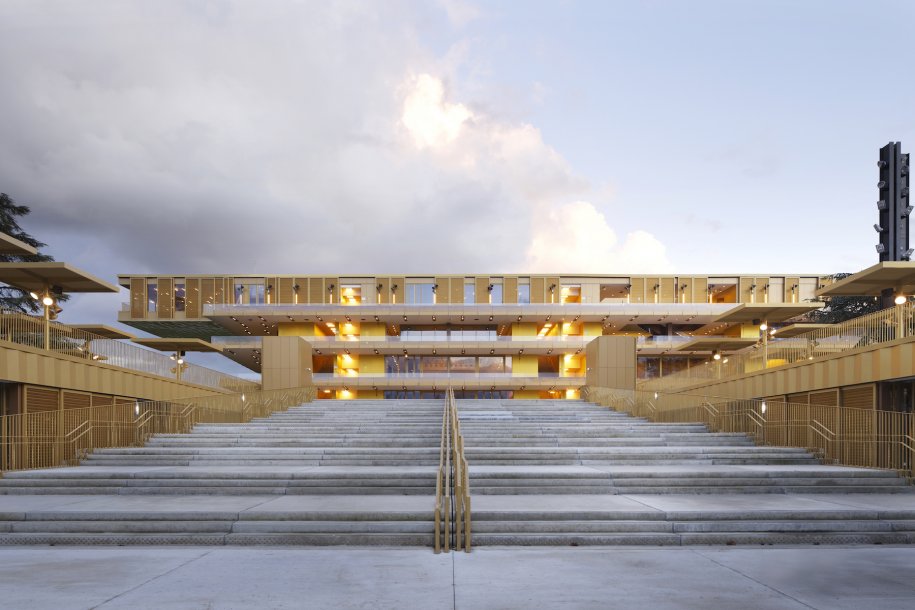 To learn more about the capabilities of GKD Metal Fabrics, visit: https://www.gkdmetalfabrics.com/

GKD Metal Fabrics: A New Facade for the Home of the Cougars